PROVENANCE : Acquired by Arthur Mitchell, director of the Mitchells and Butlers Brewery in Birmingham, ca. 1920’s, presumably upon moving to Glenfall House in Cheltenham, Gloucestershire - Thence by descent in the Mitchell family after his death, 1965-2019.

SIMILAR PIECES : There are only three pairs of firedogs of this design known to have survived. The first was made in brass for the Gimson family and was acquired in 1919 from Gimson's executors by the New Walk Museum in Leicester. The second pair was made in steel. It sold at Christie’s, New York, on 11th June 1999, lot 399, and is now in an important American private collection. While the provenance in the catalogue was incomplete, it is possible that this pair is the one which appears on a 1930’s photograph of Lyndwood House, home of the Goddard family in Leicester (Oscar Graf archives). The pair offered here is the third and last one known.

Both ‘Mitchell’ and ‘Goddard’ pairs were acquired by these families several years after they were made, most likely in the 1920s and 1930s. Therefore they would not have been the original owners. The only client who is known to have commissioned a pair of steel firedogs is Seymour Henry Bathurst, 7th Earl Bathurst (1864-1943), for his Pinbury Park estate. Bathurst was Gimson’s landlord but also one of his most important patrons. His firedogs were exhibited at the Debenham and Freebody department store in London in 1907. Unfortunately his Arts and Crafts legacy was not preserved and many of the pieces he had commissioned were sold. At this point we presume his pair was either sold to Mitchell or to Goddard, and given the proximity of the former’s new house (Cheltenham) to Bathurst’s family seat in Cirencester, one might be inclined to believe that it was Arthur Mitchell who acquired Bathurst’s firedogs.

NOTE : The design of these firedogs was largely inspired by a seventeenth-century pair at Haddon Hall, Derbyshire, which Gimson drew as a student in 1888. Gimson’s preparatory drawing for the present pair is dated July 1905 and is kept in the archives of The Wilson, Cheltenham Art Gallery and Museum (P.1941:223:211). Another drawing, dated 12th May 1904, shows an almost identical pair in wrought iron for Lionel Phillips of Tylney Hall, Hampshire. However, the whereabouts of these firedogs are unknown and none of the three known pairs are made of wrought iron, which could indicate that the Tylney Hall pair is either lost or was instead made 1905 drawing in steel.

EXHIBITION : The second pair of steel firedogs was exhibited at the Detroit Institute of Arts, as part of the landmark exhibition ‘Decorative Arts 1900 : Highlights from Private Collections in Detroit’, from 7th November 1993 to 9th January 1994 (lent anonymously under number 10).

We are extremely grateful to Mary Greensted for her precious help in cataloguing this piece. 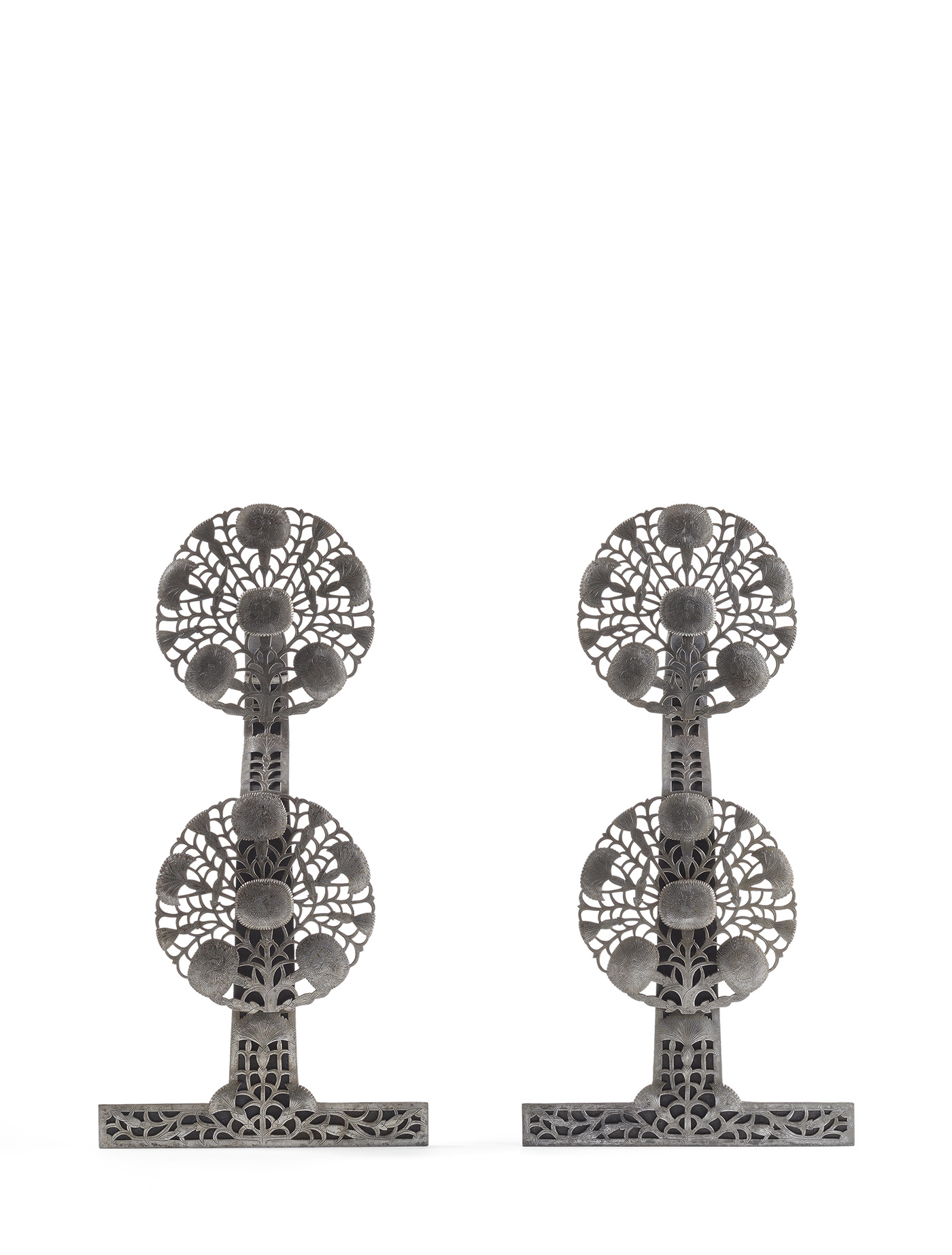 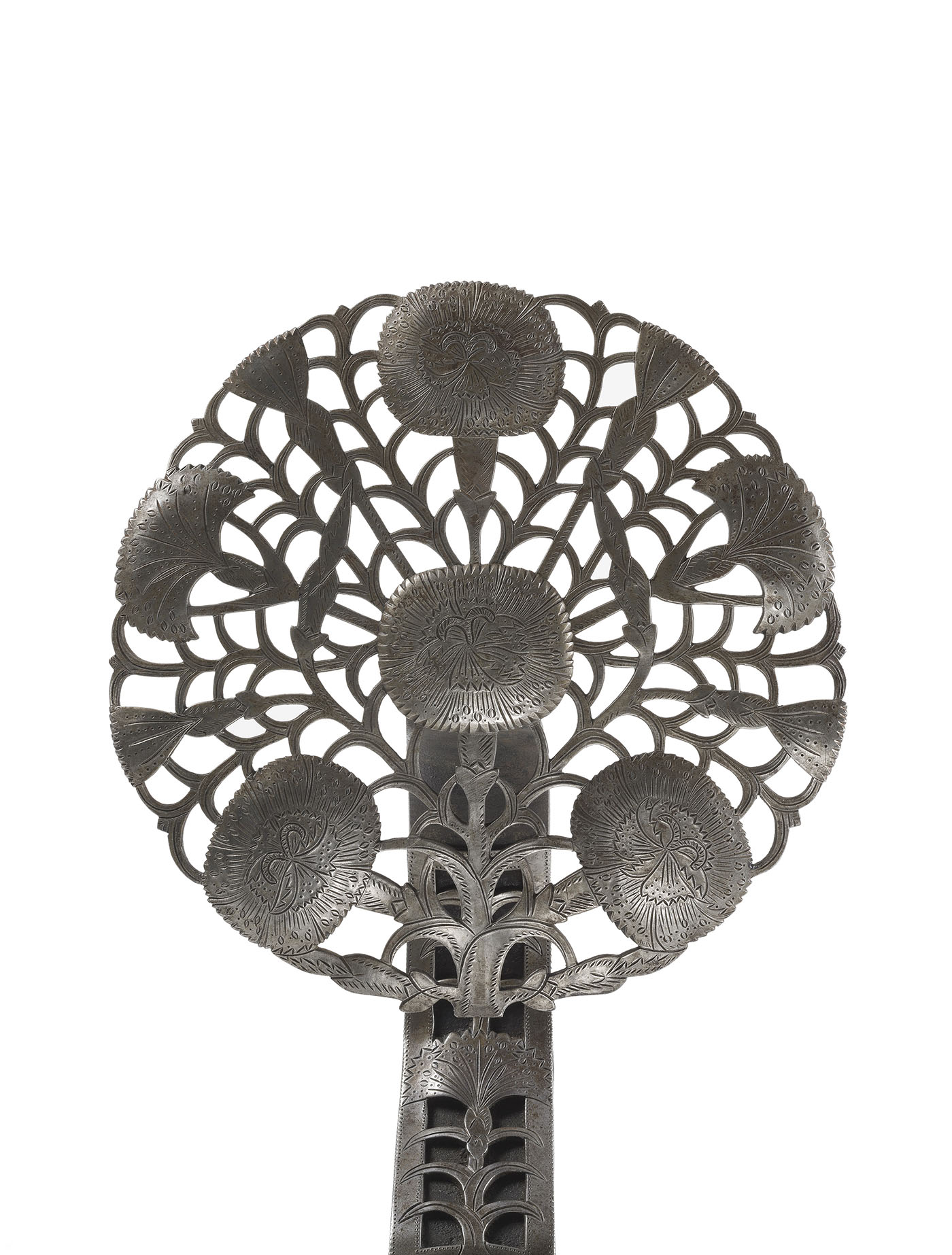 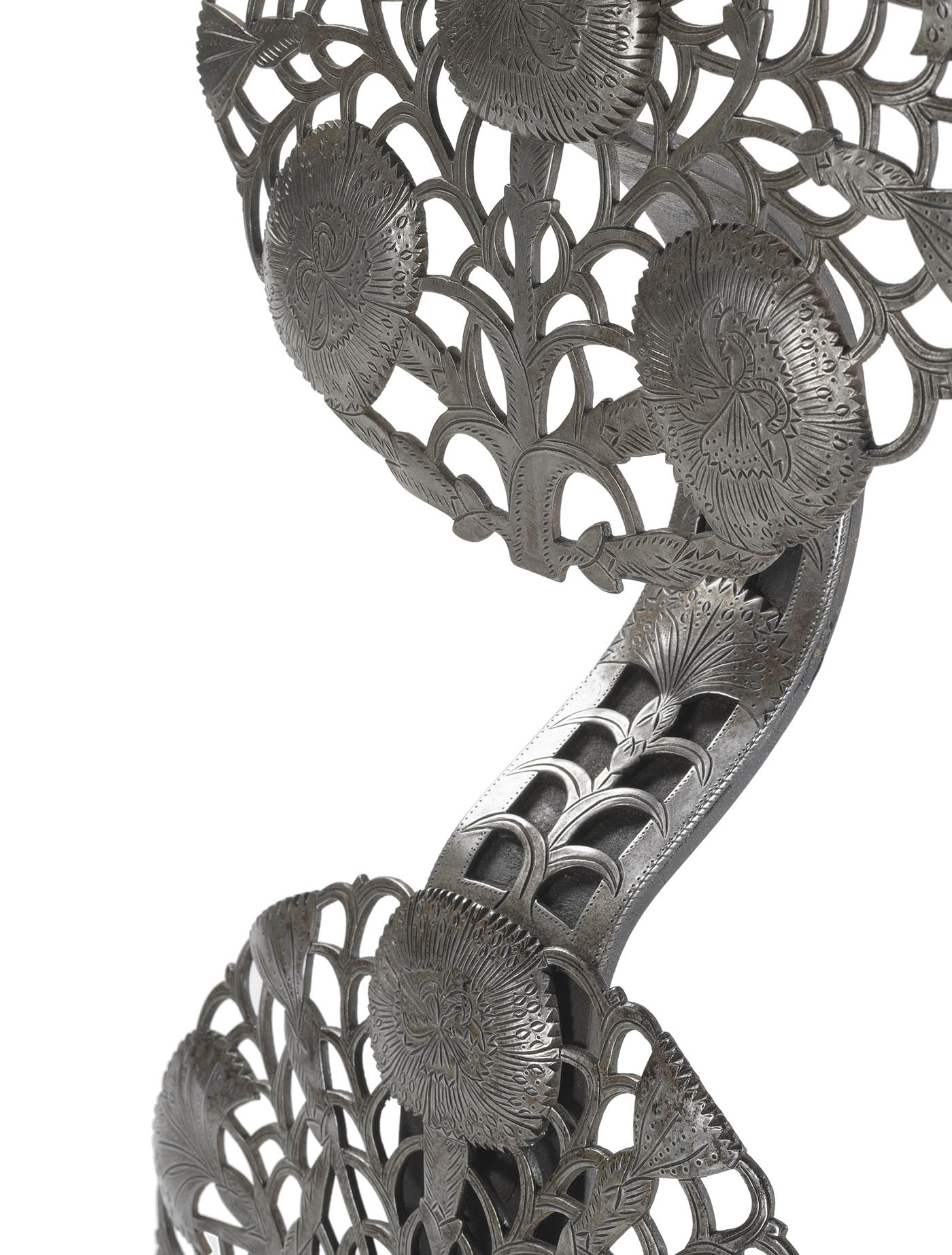